The universe creaks as the stars align. The August Bank Holiday looms and beer festivals are once more uncaged from their prison in the Shadow Zone and roam the Earth with impunity. Ravenous, they are, and legion. 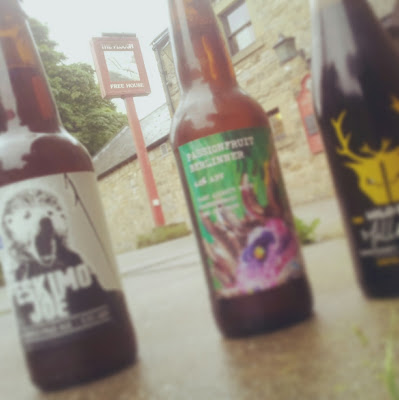 The Plough is a public house in my home town of Cramlington (although I do have a bit of a laugh, off and on, about how I live across the road in East Hartford now) and this weekend a beer festival is happening there. For maybe two weeks Jamie, a friend of mine who works there (ring the nepotism alarm!) has been texting me updates on the increasingly "craft" roster of beers she's been putting together.

Into my hands, tonight, went three bottles from this list, a teamsheet of excellent beers both home and away, which puts Cramlington- a town remarkable for appearing in a Biggles book, and for Sting once working here- in an excellent beery light. 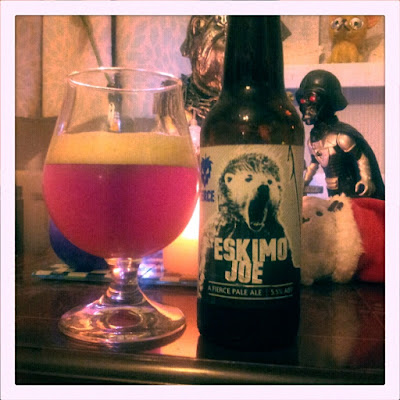 Eskimo Joe, from Fierce Beer, looks like a double hard bastard. For a start, the Fierce logo- a pissed-off looking hop, looks it's just about reached its limit for this shit. More obvious than this, though, is the fact that the label art features a polar bear in Inuit garb that is just straight up screaming, You know you're in for a good time when there's a polar bear on the bottle.

It's a pale beer, and made with cold-pressed coffee. It took this reporter, who has been a bit tired all day, a couple of minutes to get the whole "Eskimo Joe" thing. And from the aroma that spirals skyward from the bottle neck, there is the sensation of slyly pressing your face into an open bag of coffee grounds. A quick pour fills the glass with dark orange, orange dressed for a secretive night-mission and topped with a thick head of snowy foam that you could lose a Sno-Cat in.

The coffee taste is unsurprisingly fulsome. living as it does beneath a scent of malt, burned matches and yet more coffee. Layers of vanilla are spread over this heavy canvas of Morning Joe, with a mild hoppy tickle that skitters lizardly on the outskirts of the taste profile.

The final mouthful banished, the aftertaste is one of sticky sweetness and invigoration, the vanilla showing itself more as the coffee begins to die away. The driving of a clenched right fist into an open left palm as your correspondent lines up the next beer.

Tempest Brewing's Passionfruit Berlinner bolts out of the gate with a passionfruit blow to the nose so sharp and deliciously caustic that this reporter's right eye twitched shut instinctively. It pours thinly into this barbarian's glass, the colour of an ancient Roman ransom. It punishes the tongue with parching sourness then makes amends with gushes of fresh juice flavours. 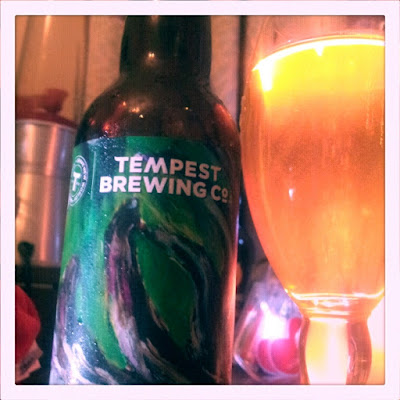 A crisp and clear view can be had through the beer, bubbles of carbonation so tiny within as they wobble to the surface. Taking in and holding a mouthful, they crackle as they happily die on the tongue, their job done.

The aroma loses some of its jagged edges as the glass begins to fill the drinker, but retains the rounded juiciness it shares with the flavour. The scent becomes a sojourn through a night-time garden of unearthly delights, fruit so fat it has grown arms and legs and walked among the humans joins the nasal sensors in this heady meander.

With the head tilted back and the last mouthful joyously chugged, the passionfruit continues to sizzle and tingle on the beer-soaked surfaces of the mouth. An aftertaste that must be banished quickly with water, as the third beer of the night makes its entrance.

Millionaire from Wild Beer Co swaggers in to bring an end to the session. Millionaire or not, I pop its head off with ease. "The revolution begins" I tell myself, as I imprison the Millionaire in a little glass cell and prepare for its execution. 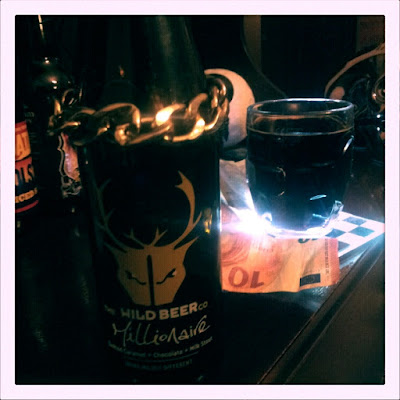 I have already inhaled the Millionaire's scent- the initial rush of the "salted" aspect of the salted caramel flavour arriving just before the caramely, sugary end of the bargain makes it to the nose.

To the eye, Millionaire is the shiny black of an idle smartphone screen. On the tongue, this salted caramel, chocolate milk stout is cocoa nibby luxuriance, like drinking the Cadbury's Caramel Bunny's blood. It feels like it should be stronger than its 4.7% abv, as it smothers the tastebuds in roasty, savoury-tinged warming richness. The mouthfeel is on the lighter side of oily, which keeps things moving on nicely after two glasses of much paler beer.

The strange battle between savoury and sweet, salt versus everything else, continues mouthful after mouthful, with no clear winner until the final imbibe where the salt appears to finally win out, the last flavour to disappear into Rich People Hell, with the rest of the Millionaire.

Tonight's mission completed, a weekend of beer festivaling awaits this reporter. I'm aware that writing about a pub festival lineup in my home town seems very parochial, but I think this shows that what we're calling "craft beer" is becoming a more accepted thing in the green and grey areas between metropolitan points of light. Cramlington is really not that big of a deal, or of a place, but there really shouldn't be anything stopping pubs in little towns putting on the same excellent wares that we unfailingly expect  to see in the major cities.

It's easy to think we ain't worth a dollar, but we should always feel like millionaires.